The V2 Pro Series 3 is a pen vape that really, actually, truly vaporizes dry herbs. I say this because every other pen-style vaporizer I’ve seen up until now that claims to vape dry herbs just burns it, or it performs very poorly. 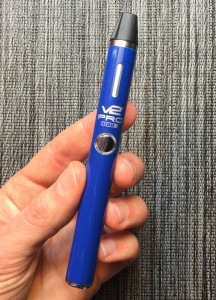 This is actually a 3-in-1 unit, and it uses different cartridges for its three functions: E-liquid, Loose Leaf (dry herbs), and Wax (concentrates).

The cartridges are held in place with a magnet, as is the charger, which I really like because it’s super easy to use. The only issue I found with the dry herb cartridge is that the metal ring at the top can get a little hot during use, so just make sure you avoid touching that part and only put your lips on the silicone mouthpiece.

When using the one for dry herb you can only fit about 0.1g in there, it’s pretty small. However, it’s very efficient with your material so you’ll get about 5-8 decent draws from that amount. 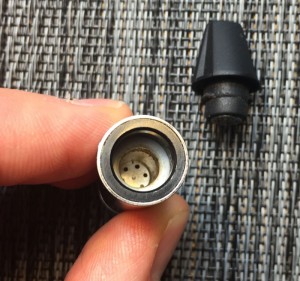 To keep the herb chamber clean you should brush it out after each use with the little tool they provide, and the small stainless screen attached to the mouthpiece will need to be cleaned quickly with a little rubbing alcohol every once in a while to remove any built-up residue.

The wax cartridge for concentrates feels solid and well-made, and it’s the heaviest of the three. It has a “snake” coil at the bottom and the inside walls slope down into the middle where it heats. I actually think it performs very well with wax, I get some nice sized draws from it and they’re very smooth.

I’ve also tried the e-liquid tank a bunch of times and it performs pretty well, but it does seem geared towards beginners. If this will be your first pen I think the performance is more than enough. 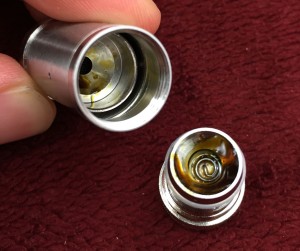 So what’s really cool about this pen is that it’s truly the first 3-in-1 vape that I’ve reviewed that I actually feel works well with all three cartridges. Every other “3-in-1” I’ve tried up until this one has really only been good with concentrates. That really says a lot, so kudos to V2.

You should get about 5-7 draws from the 0.1g the chamber holds, just don’t expect big clouds of vapor.

Even though it’s light the vapor has a clean taste and it’s pretty smooth, I didn’t have any problems with that aspect. It doesn’t burn your stuff at all either, it vapes it nice and evenly which I definitely like to see.

When you get near the end of your session the last few draws won’t taste quite as good as the first few, but that’s not really abnormal for portable vapes.

It takes about 75 mins to fully recharge, which isn’t terribly long. The charger it comes with has a USB connection, and they do offer a wall adapter and car adapter also to plug it into which is pretty convenient.

This unit also has pass-through charging, which means you can use it and vape while it’s plugged in and being charged. You can’t do this with a completely drained battery though, you’ll have to let it charge for about 20 mins or so before it’ll turn on and let you use it.

This vape has a 2-minute automatic shut-off feature, which means every two minutes it’s gonna shut the heat off and if you want to continue your session you’ll have to restart it. Luckily, you only have to hold the button down for 2 seconds to start the heat again, but you will have to watch it because only the light blinks to indicate that it’s shutting off, it doesn’t beep or vibrate or anything.

I got about 15 of these 2-minute sessions in my testing, which is about 30 minutes of actual usage before the battery dies.

I think this thing is pretty cool, and if you’re lookin for something efficient with small amounts of material, that gives you just a handful of light draws, then this might be the one for you.