These micro-style vape pens from CloudV are pretty sweet, and there are a few different models to choose from.

They’re designed for use with wax and oil concentrates only, dry herbs will not work in these. For best performance your concentrate should be very clean and it should fully melt to a liquid when heated. 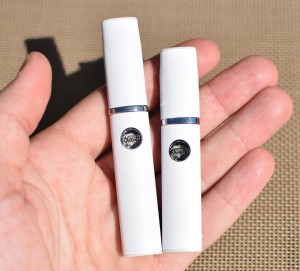 I like the coils or atomizers with the Cloud V pens because not only are they made well and perform well, but they stick inside the battery connection nice and tight to greatly reduce the chances of it coming apart in your pocket.

There are a few small differences between the Classic and Platinum models and I discuss these in my video review, but even though the Classic version is cheaper I find myself preferring that one because it feels a little more solid to me.

They also came out with mini versions of these two pens, and they look exactly the same and perform just as well but they’re about 20% smaller than the full size ones.

Definitely check out my top picks for best wax pen to see what’s currently at the top of the charts. 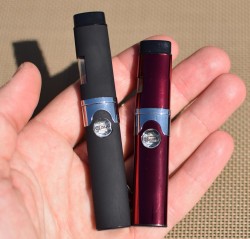 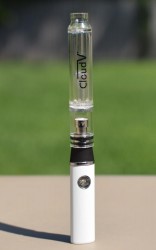 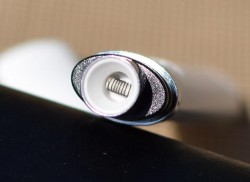 These are Mini or Micro Style vape pens for wax and oil concentrates made by a company called Cloud V. So this one, the white one, is the Cloud Classic and this black one here is the Cloud Platinum. So there is a couple of differences between these two. I’ll start with the Classic one. It has a typical design, three piece design, the mouthpiece, atomizer, and then the battery. So if you take it apart, these are the three pieces. So if you just saw that, the atomizer in this one, it actually stays in there, like really well, like it’s actually kinda tough to get it out. But I like that, I thought that was a really good thing because a typical problem of these mini style ones is the atomizer or the whole top piece coming off like in your pocket. This one’s the like hardest one that I’ve tried yet, like it sticks in the best so even when you try to get it back in you actually have to like, there you go. So that was actually like, you know, I had to give it some force so point being it’s really in there well which is cool. So what I’ll do is I’ll show you how that differs from the Platinum one.

Because with this one, it doesn’t stick in so well actually. I don’t know if they are all like this or, ya know, for some reason it’s just mine, but this one, see that, it comes out much easier and it doesn’t really like snap in very hard. So I don’t know, this one’s actually like the upgraded one too, this one’s slightly more expensive. So I’m not really sure about that but for whatever reason, the atomizer definitely fits better in this one for me.

So let me go back to this one real quick. So the mouthpiece is just nothing, it’s hollow. If you are familiar with these, they’re basically all like that. So the classic one has a 3 click locking thing so click it three times, locks and unlocks the vape. Most other pens are 5 clicks including the Platinum one, not that that really matters. So Cloud rates the battery that comes with this one at like 24-48 hours of usage. But it’s really hard to say how long the battery’s gonna last or how many draws you can get from it because it’s gonna vary a lot between people, it really depends how long you hold down the button for, how often you are going to use it throughout the day. So the point that they are trying to get across is that the Platinum one is supposed to have a slightly longer lasting battery than the Classic one.

Now as far as the atomizer or the coil, basically the main part of the vape, Cloud V calls these their tornado atomizers, so the inside is ceramic and it actually like funnels down like the shape of it so it’s kinda cool because it, ya know, sort of just points down onto the coil. So I like this design, I thought it was pretty cool, and cooler than, ya know, a bunch of others that I’ve tried. There’s not really a lot of concentrate in there right now, but ya know, if I hit the button, that’s basically what it’s gonna do. So what’s interesting is that the atomizers are actually slightly different on the Classic and the Platinum. The Platinum one actually comes with a slightly smaller one, you can tell. They both seem to be pretty much shaped the same, and they call them both tornado atomizers but they’re definitely slightly different. So the Platinum one, 5 clicks, ya so there’s really nothing in here but there’s the coil. The Platinum also has a different mouthpiece so it has like a little view-it window in the side that when you attach to the atomizer, you can see through there. I mean, you can’t really see it yourself too well, like while you’re taking a draw, but I guess maybe if you’re looking in the mirror or something or someone else is looking at you, I don’t know. And then it actually has like a little removable tip on the mouthpiece which is different because the Classic, it’s just the one piece.

So as far as the performance, or you know, how good these worked, I thought they worked really well, I was pretty impressed with the quality of the vapor, especially for like a mini style pen. I really liked them, it was smooth, comfortable, very efficient with the concentrate. I didn’t really notice like too much of a difference between the Classic and the Platinum as far as performance, but I kind of found myself like preferring just the Classic one. So I’m down with these, if you have any questions about them, definitely just leave it in the comments and let me know. You can watch reviews of some other vapes on my website- VapeCritic.com. Thanks for taking the time to watch and stay up!