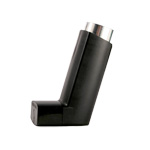 This is the PUFFiT vaporizer, a portable unit that resembles an inhaler.

Many people are intrigued by its appearance and low price point but unfortunately I was not impressed with the performance of this unit.

After trying it out multiple times I just can’t get it to provide a good vaporizing experience. All I can get is a light wisp of vapor on the first draw or two, and after that it just feels like air.

Because of this it’s not a vape that I’m going to be recommending as there are many other units on the market that I think perform better.

UPDATE: The original PUFFiT that I received when I purchased it ended up being from a bad batch that was produced (defective). I received a replacement unit from the manufacturer and this new unit doesn’t have that foul plastic taste that I mention in my review. However, I’m still unable to get good results even with the new device, so most of my review still stands (except the taste part). In one of my newer videos I talk for a few minutes about what happened, you can watch it here.

Check out my best portable vaporizer page to see all of the models I currently like and recommend.

What’s up, everybody? In this video, I’m going to review the PUFFiT vaporizer. This is the one that looks like an inhaler. Now, unfortunately, this isn’t going to be a good review. So if you already bought one of these and you own it, I’m sorry. But for anybody who didn’t buy this yet and was thinking about it, just skip it.

After using this thing, it confirmed for me that this is really just like a gimmick. It really just sells because it looks like an inhaler, in my opinion. Some people like that. But it really doesn’t perform well as a vaporizer at all.

This is the 13th vaporizer I’ve reviewed so far, and in terms of performance, it’s at the bottom of the list. So it’s really not a vape that I’m going to be recommending. If you’re looking for a cheap vape, you don’t want to spend a lot of money, but you want to try vaping out, take a look at the Magic Flight Launch Box. That’s one that I personally love. Tens of thousands of other people love it also. So you really can’t go wrong with that one, if you really don’t want to spend a lot of money on a vape at all.

Now the reason that I say that it doesn’t perform very well at all is because even when I fully pack the chamber and I turn the heat all the way up to the highest setting, and I took a really long draw, 10 to 15 seconds, which is a long time to be drawing on a vape, all I got was a little tiny bit of vapor. I got some flavor and I got the taste of plastic and metal. Now, I don’t know about you, but when I’m vaping, that’s not what I want. I want flavor, I want vapor, and I want no other tastes in there.

So normally, in my review videos, I go into detail about how the vapes work. I show you the different parts. I talk about the battery life. I talk about how many draws you can get from typical packing. But for this one, I’m not even going to go into that, because, like I just mentioned, I really don’t recommend that anybody buy this because I think you’re going to be disappointed in how it works.

I know some people are going to disagree with me, and that’s fine. If you bought this as your first vape and you like it and you think it’s great, I’m going to tell you right now that there are way better vapes out there. Like I mentioned, the Launch Box is cheaper than this and it works better. If you wanted to spend a little more, if you wanted to spend $200 or $250, you can get a really good vape.

So overall, even though this thing is cheap and some people like the way it looks, I’m not going to be recommending it. I do think you should avoid it. Listen, I know that it’s disappointing to hear that. I’m disappointed myself. I don’t like to see companies coming out with products like this, that get people excited, but then you use it and you’re disappointed. Who wants that? That’s not the way things should work. If you’re going to make a product where people get excited about it, back it up with the thing actually performing well.

So since I don’t really have anything good to say about this one, I’m going to keep the video short. If you want to see more reviews or see ratings that I give to other vapes, check out my website, VapeCritic.com. Otherwise, if you have any questions for me, about this or any other vape, feel free to let me know. I appreciate you taking the time to watch, and I’ll see you soon.