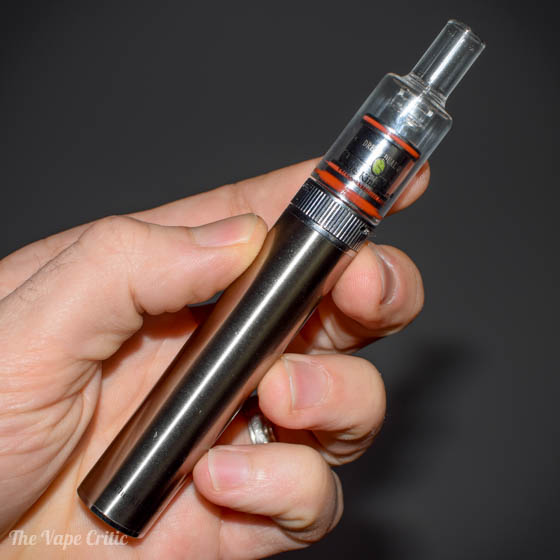 This is the Kind Pen Dream, a vape pen designed for use with wax and other solid concentrates (just not thin oils).

I like this one, it’s a tiny bit different than most other pens and has a few unique characteristics that set it apart.

Larger Than Your Average Pen

It’s bigger than most pens, it’s not the standard “ego” size and shape, it’s wider. It’s actually only about a centimeter longer than competing pens (KandyPens, Puffco, etc) but it’s about 50-75% wider in diameter (feels nearly twice as thick).

This review is outdated and I don’t currently have the same feelings and thoughts about this vape. Check out my top picks for best vaporizer pen to see the models I rate the highest right now. Kandy Pens is consistently in the top 3. Stay up!

The battery has a 1500mAh capacity which is at the top of the range for wax pens, most have capacities under 1000mAh which means this one has above-average battery life. 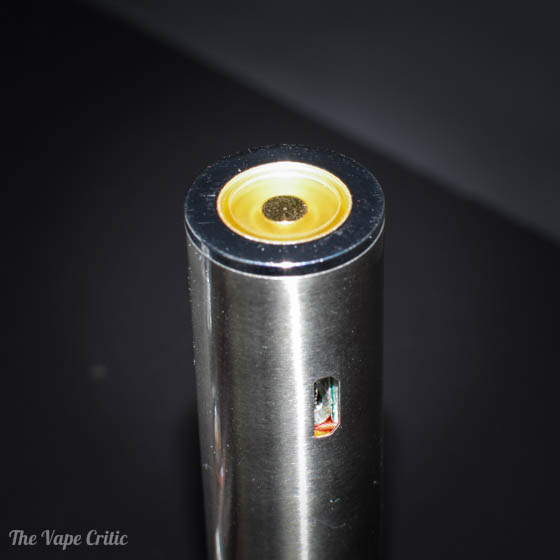 When you need to charge it there’s a micro-USB port on the side near the bottom, and it has pass-through charging so you can use the pen and it’ll function normally while plugged in and getting charged. Not many pens actually have this ability so it’s one of the main differentiators.

Not Your Typical Power Button

There’s no button on this battery like there typically is on other pens, the way it’s powered is by a touch sensor on the bottom of the battery.

It’s interesting, I kinda like it but at first it might feel a little awkward to hold. When you grab the pen it’s typically easiest to touch the sensor with the tip of your middle finger, if you can picture that. I don’t think it’s bad it just means you hold it a little differently than other pens. 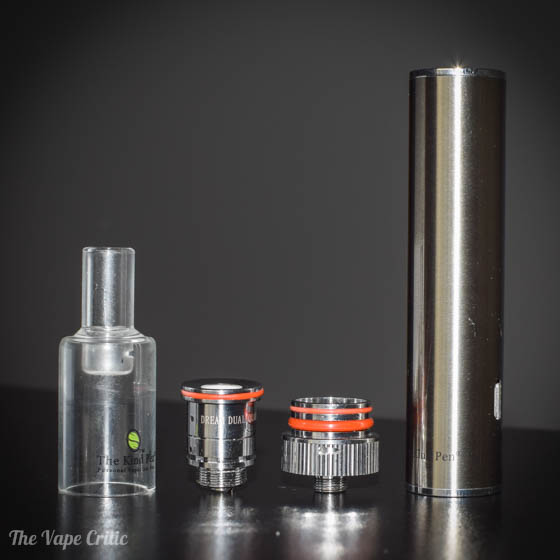 It still works the same way as other batteries – 5 taps to turn it on and off, 3 taps to change heat settings, and you hold your finger on the sensor to keep the heat engaged while you’re drawing from it.

The Dream comes with two different atomizer styles, and I’m diggin them both. One of them has dual quartz rods (coil-wrapped) and the other one is considered a “coil-less” ceramic plate. However, both of them share the same ceramic cup that they’re sitting in.

Many vape pens currently on the market heat at very low temperatures which can have its advantages, but this pen heats up faster than most so it feels more powerful and produces denser vapor with shorter hits. 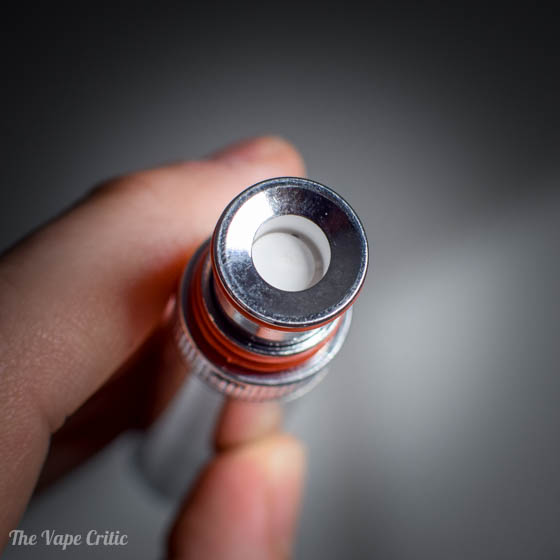 The battery has 3 heat levels and even on the lowest level I still feel that this one is strong, it doesn’t really have a “low” setting to me.

This means that even with the ceramic plate atomizer on low you’ll get good vapor production with a short ~5 second draw, and a monster cloud if you keep pulling for 10 secs.

The higher you set the heat the faster your concentrate will be vaporized, so I recommend drawing at a fairly quick pace for the smoothest vapor and best taste (on any setting).

With the quartz atomizer your wax is vaped very quickly so you usually won’t have to draw from it for more than a few seconds to get a good hit. 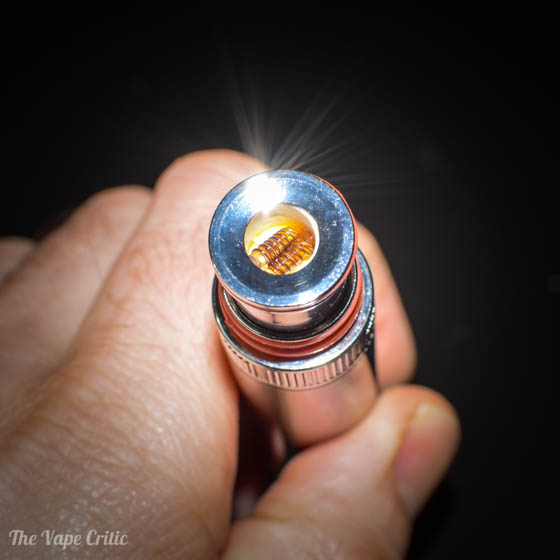 As far as the differences between them that’s really for you to decide. I actually don’t feel that the way they perform is that different, they both heat up quick and produce lots of vapor with relatively short draws.

Some people seem to prefer the taste from a quartz coil, and some people like the flavor from ceramic more, it really seems to just be personal preference.

I normally like quartz a little better but the ceramic plate atomizer this one comes with is cool because it’s powerful, so I’d say I like them both equally with this pen.

Like most pens this one does work best when you load small amounts of wax at a time, about the size of a BB which will get you a handful of nice draws. Then if you want more, load more. 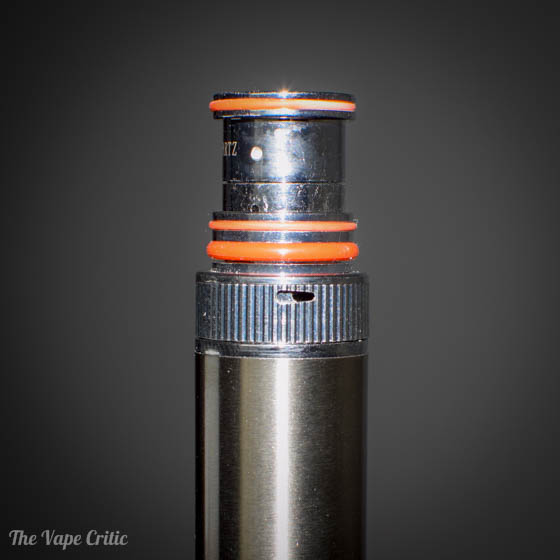 The airflow through the atomizer is very good with the Dream, the level of draw resistance is actually exactly what I prefer.

You can adjust how much air gets through by turning the ring on the atomizer to expose the four air holes, and you can keep the holes partially closed if you want to really fine tune the resistance.

When you completely close it up you get zero airflow through it, and when you open it up all the way it has a very natural free-flowing draw. You have the ability to adjust it to any level in between which I think was done perfectly. Some pens don’t provide enough airflow, and some are just too open, but this one hits the sweet spot. 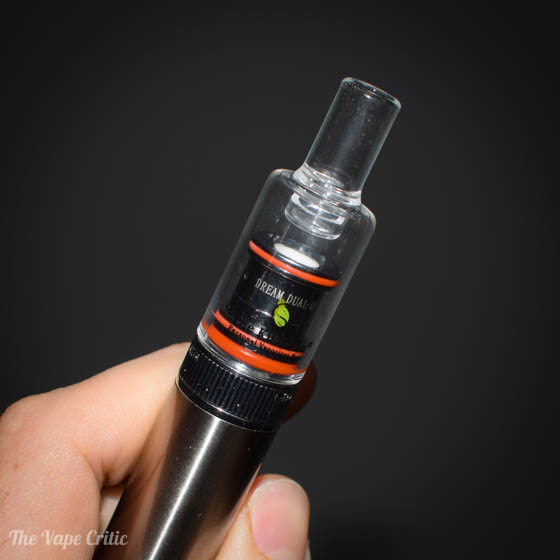 The only thing you need to be mindful of is that they placed the air holes that are inside the chamber at a very low point on the walls. This has pros and cons… the bad part being that you really can’t load more than a tiny bit at a time to avoid any leakage down into the atty, and you shouldn’t try using very thin oils in here. The advantage of the low holes being slightly smoother vapor when the airflow comes from under the coils as opposed to the top of the atomizer walls.

So it has a glass mouthpiece or “globe” and there’s three things I like about it and one thing I don’t. Not many pens come with glass parts but they did it right with this one.

What’s great is the unadulterated taste of the vapor since it only touches glass, there are no metals, filters or anything else in the airpath. 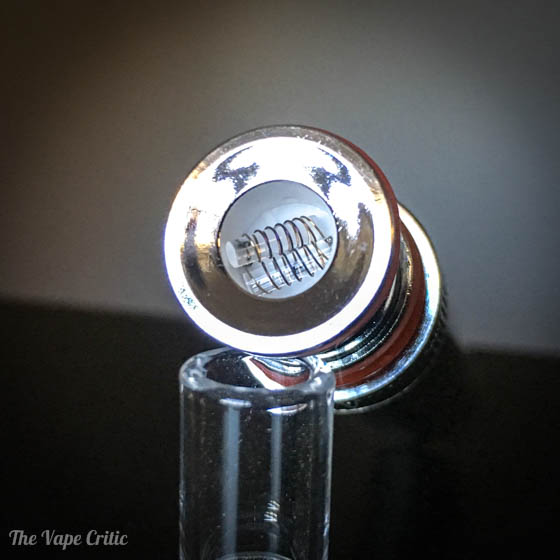 It’s also super easy to keep clean because all you gotta do is soak the whole thing in some ISO alcohol after running it under some really hot water, and it’ll come out like new.

The last thing that’s cool about it is the built-in “splatter guard” which helps prevent any of your wax from bubbling up and splattering up to the mouthpiece. Not every pen has this and I like it, it’s well-designed and serves a functional purpose in addition to looking unique.

Now the only thing that’s pissing me off about it? It has a few o-rings that help hold the glass in place when it’s attached, and they do a great job of keeping a snug fit without wobble, but sometimes the top o-ring likes to comes off when I pull the glass off.

I’m guessing this is because when a little oil residue builds up on the walls of the glass it causes the o-ring to stick to it, and since the top o-ring is a pretty thin one the sticking can make it dislodge itself. It’s easy to get it back on, and I haven’t lost it, but it’s a little annoying. 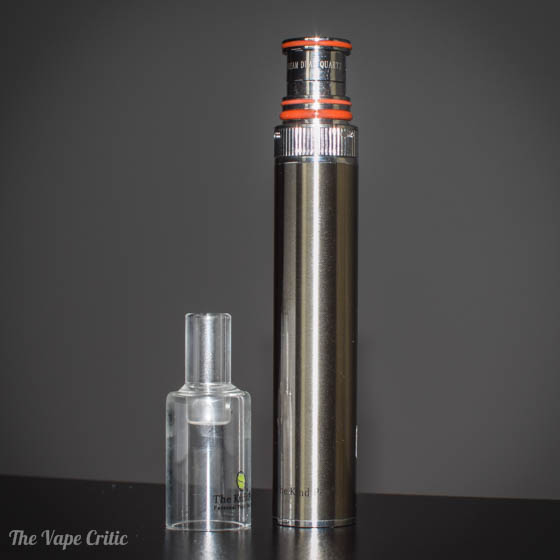 Luckily the glass actually stays in place fairly well without that top o-ring even in there, it just provides a little extra stability, so if it bothers you it’s not a problem to just leave it off.

This company stands behind their stuff and offers a lifetime warranty on the pen. Atomizers are delicate and can’t be guaranteed after you load them but if anything is wrong with them when they arrive or if anything ever goes wrong with the battery they’ll take care of you.

Overall I’m really diggin the Dream, it’s a well-built pen with great performance and a bunch of cool characteristics.

The strong ceramic atomizer and the near-perfect airflow are my two favorite things about it.