The Pinnacle Pro in my opinion is extremely similar to the original Pinnacle I reviewed that I really wasn’t thrilled with.

Some people seem to like this one, so I decided to give it another shot and try the Pro model, and I also got the water tool with it this time (the DLX package comes with the HydroTube). 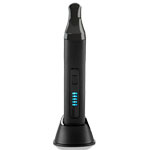 Overall I’m really not impressed, I still think the vapor feels a bit hot and harsh which makes the experience a little uncomfortable and not very enjoyable. I also don’t like the mouthpiece design very much, and although the hour of battery life you get is pretty average it can take quite a while to fully recharge (up to 3 hours).

It does perform better with the HydroTube attached and filtering the vapor through water, and it’s definitely less harsh, but I feel that using it with the water tool severely limits its portability.

What’s up, how you doin? It’s been a little while! What I’m gonna show you in this video is the Pinnacle Pro portable vaporizer. This thing is made by the Vaporblunt company and I did review their original model which is this one right here.

Now there are a few small differences between them and I will explain what they are in a minute.

But before I get started I just wanted to say that I do know that there’s some people out there that like this vape, and I completely respect everybody’s opinion believe me, but I just can’t lie to you guys my viewers and say that I like this vape, because I really don’t.

So if you happened to have seen my review of the original Pinnacle the few things I picked out and mentioned that I didn’t really like about it were 1) the mouthpiece being kind of cheesy feeling, 2) the vapor it produces being kind of hot and harsh, and 3) overall I didn’t think it felt like a very well made product.

Now with the new model, with the Pinnacle Pro, the things that I don’t like about this one are basically the same.

So like with the original model one of the issues I had was with this mouthpiece thing how it sort of just pushes on and off and is sort of just loose – I don’t know just not that tight not really that well-made.

The new one looks a little different, it’s black, but it’s sort of like the same thing. I mean it just pops on and off, it fits a little loose, and I’d say it’s maybe a tiny bit better but it’s still practically the exact same design.

And then they both have this extra little mouthpiece thing here at the tip which I also don’t quit understand, why this is even a separate piece, but whatever this piece gets stuck in there and now it looks like that.

So when you take off the mouthpiece the chamber in here comes out, sort of like a cartridge type thing, this is the actual herb chamber, and this is what the inside of the vape looks like or the heating chamber.

Basically what you’re supposed to do is pack your herbs in here, not too tight and don’t over-fill it, and then you drop it in and take your mouthpiece and snap it on like that. Then you turn the vape on by clicking the power button.

And my battery is currently dead which is what that means, the flashing blue light, so what I’m gonna do to show you how it works and the different heat settings is I’m gonna actually plug mine in.

So that is actually something that most people would consider a pro or a positive about this vape, that it can be used while it’s plugged in and charging.

To turn it on push the button once and it’s gonna flash, that’s the lowest heat setting that bottom light, so that means that it’s heating up when it’s flashing. Once it reaches the desired temperature, which is 375°F on this setting, it’s gonna turn solid and stop blinking.

Now I’ll admit that it’s cool to have multiple heat settings in a vape, but I don’t really feel like 375°F is a good place to start. Some people like to vape at lower temperatures than that including myself, so I would expect maybe a lower starting temp, but the main issue for me is that even on the lowest temperature with this vape on 375° the vapor still feels too hot and harsh, like I’m breathing in hot air.

Most of the other good vapes I’ve reviewed don’t give you that kind of feeling when you draw, you just kind of feel like a cool or neutral type of feeling and then you get a bunch of vapor, it doesn’t really feel very hot while you’re drawing, but with the Pinnacle it feels very hot to me every time I take a draw, even on the lowest heat setting.

So this is a convection style vaporizer, and one of the benefits of that is that there is very low draw resistance, it’s very easy to pull from this one. So that’s something that I would consider a positive or something good about it, it’s just that unfortunately because of the fact that the vapor feels kind of hot, harsh and a little uncomfortable, it kind of cancels out the positive factor of the low draw resistance, if you follow what I’m sayin.

Now if we put aside the issues I have with the mouthpiece, one of the things I do like about this vape is its size, it is pretty damn small, and in the realm of portable vapes small is good.

Now if I back up a minute to the issue with the vapor being hot and a little harsh, sometimes when I say that to people they come right back and say well why aren’t you using the HydroTube that you can get for it. So when I bought the Pro I went ahead and got the Hydro Tube this time.

What this thing is for is they give you a second type of mouthpiece that fits in the bottom of the tube, so you actually fit it on top like that, so now your Pinnacle becomes this thing with this HydroTube on top and then you fill a little bit of water in here up to about here, and then give your vapor a little water filtration to kind of cool it a little and make it a little more comfortable.

I will admit that using the HydroTube does make the vapor more tolerable, it makes it more comfortable, it doesn’t feel as hot and harsh going in so it sort of neutralizes that issue.

However, in my opinion once you put something like this onto your vape and there’s water inside this is no longer a portable vaporizer. How are you really gonna use this anywhere other than inside your house or something like that? I certainly will not be putting HydroTubes in my pocket and trying to do this on the go.

I do think it performs decently like this when you use it with the water tool, but that sort of brings up another issue. So like I said if you’re going to use it like this I would consider it mainly a cordless vape for use around the house, but if that was the case and that’s what you were looking for, a good cordless vape to use around your home, there are some other models that I would recommend over this one, even with the HydroTube.

So I guess the point I’m trying to make is that I don’t consider it a great portable vape by itself, I do think there are some other models out there that are better for that, and then when used with the Hydro Tube as a cordless home vape I also think that there are better options out there for that. So I just can’t think of a situation where I would currently recommend the Pinnacle over any of the other models I’ve reviewed so far.

Now for a size comparison this is the Pinnacle, the Pax, the Ascent, the Firefly, the Solo, and the Magic-Flight Launch Box.

So this clip here is me taking a few draws with the Pinnacle. First I’m gonna use it just with the regular mouthpiece and I have it on the lowest heat setting, so it’s on 375°F, I have the chamber inside loaded about 80% full, and then I’m basically just taking a nice slow, long draw.

Now in this clip I have the other mouthpiece thing on to use with the HydroTube, and I’m gonna take a draw from that so you can see what that looks like. Like I mentioned the vapor is a little more comfortable this way, I would say that if you are gonna get this vape I would absolutely get the HydroTube, because I really feel like that’s the only way to make it tolerable and make it a good experience.

One of the last issues I had here with the Pro is in regards to the battery life and charging it. So I was able to get in my testing about an hour of usage before the battery completely died, from a full charge. Now that was broken up into about seven 8-minute sessions, because this vape has an automatic shut off timer that’ll turn it off 8 minutes after you turn it on as sort of like a safety thing.

8 minutes is a little short though for a session and I found myself sometimes turning it back on again but I counted the minutes and I basically got about an hour of battery life.

Now that’s not that bad because that’s pretty in-line with the other portables out there, but it does say right in the manual that you might need up to 3 hours to fully recharge the battery when it’s empty, and that’s on the long side, that’s actually a lot longer than most of the good portables.

So in conclusion, I’m not too crazy about the Pinnacle Pro, there are some people out there that do like it though, so if you happen to think that this vape is right for you and you like and you wanna buy one I did put a link in the description to the authorized dealer I bought mine from.

If you wanna watch some more reviews of some portable vapes that I do like, check out my website at VapeCritic.com

I really appreciate you takin the time to watch, stay up!