This is the Phantom vape from CloudV and for the price it’s a very decent unit. It’s designed for use with dry herbs and it’s right around $100, which is pretty much the cheapest you can go and still get a good vaping experience. 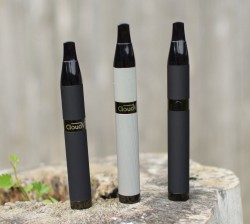 CloudV more recently released the Phantom Premium, which is mostly the same vape with two key differences: 3 temperature settings instead of just one, and an internal rechargeable battery instead of one that’s removable.

The build quality of the Phantom is real nice and it feels great in your hand, but one of the only things I’m not thrilled about is the single heat setting, which is pretty high at over 420°F.

The newer Premium model has a low setting at 374°F which I feel makes it the better option for the few extra bucks, but this original one is still respectable.

If you like a lot of visible vapor and don’t want to spend a lot then this is the vape for you, just know that the quality and strength of the vapor is not quite as good as some of the better models (albeit they’re more expensive).

What’s up? This review is of the Cloud V Phantom, this is a portable herbal vaporizer. Cloud V is a company who is pretty well known for their pen vapes for concentrates. So what’s interesting about the Phantom is that it’s a true herbal vaporizer and it’s pretty inexpensive and it works fairly well.

So this vape only has a few parts. You have the mouthpiece part, which pulls right out of the top. It’s held in by a little o-ring. And then the bottom cap of the vape actually unscrews and that is where the battery is and the battery is removable. The chamber piece, or the herb chamber where you actually put your material, that’s sort of just built into the body, you don’t take that part out and you can see that it’s pretty simple. It’s not extremely large, I found that you could fit comfortably like .2-.3 roughly in there, which is a good amount.

The Phantom has only one button on it and one heat setting. So, to turn the vape on you click it three times and then you’re gonna see the button glowing red and that indicates that it’s heating up and once it reaches the operating temperature, that red light’s going to turn into a blue light. Now it’s actually like set or calibrated to get up to I believe 428 degrees Fahrenheit, that’s the one temperature that it has, it’s kind of on the high side, it’s pretty rare that I set any of my vapes that high. Usually when it’s that high, the vapor is gonna be a little hotter and harsher than it should be. So it’s pretty simple to use. You pack it, you turn it on, you just start taking draws once it heats up.

However, there is something a little weird about it and that is that is has a two-minute automatic shut off. The light that indicates that it’s on, that blue light behind the button; it’s a very faint light. If you’re anywhere that’s bright or if you’re outside, it’s gonna be kinda hard to see. I found myself having to look at it like this a lot to even see if it’s still on and that’s a little annoying because every two minutes you gotta to keep turning it on but you never know when it’s off so this is kinda like a vape where I was constantly looking at the button and I don’t know, it’s not terrible but it’s not quite as relaxing as some other vapes.

As far as performance goes, I do think it works fairly well. Not quite as good as like the top tier portables, but definitely decent. Out of that .2-.3 roughly that you can fit in the chamber you’ll probably get like 10 decent draws from it. You’re gonna get a decent amount of vapor. Now the only thing that I kinda mentioned before but I’ll mention it again that I’m not completely thrilled with as far as the vapor quality is that it does feel a little hot and because of that high temperature I guess, that 428 degrees that it’s preset at, I’m not really that surprised but yeah, it’s not quite as smooth as some other ones. The taste is good, especially for the first half of the session, but then halfway through, ya know, it kinda starts to get a little rough and not quite as good as in the beginning so, it’s not terrible but it’s not great so it’s just something to keep in mind.

I really do like how easy it is to use though. It’s a very simple vape. It has a nice weight to it, it feels quality, it has a nice, soft grippy outside. So I like it, I like the build quality of this one, I do. As far as cleaning goes, there really shouldn’t be too much to do because as long as you brush out the herb chamber after each session and get whatever loose stuff is in there out, you should be okay as far as that goes. And then as far as the mouthpiece goes, there’s just like a built in screen kind of in the bottom. You don’t really take any pieces of this apart. So, that’s another part that if you just brush off after each session, you shouldn’t have an issue. But I did notice some residue over time building up on this top piece. So a couple times now I have taken like a Q-tip, dipped it in rubbing alcohol, just to quickly clean off this part.

So overall, I’m digging it. It’s easy to use, works well, it’s pretty inexpensive. So, that is the Phantom. If you wanna watch some reviews of other portable vapes I like, including their concentrate pens, you can check out my website VapeCritic.com. I appreciate you taking the time to watch and stay up!