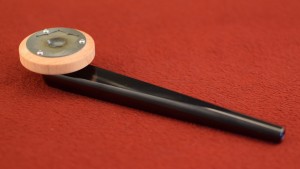 The Lotus is a very unique vaporizer, there aren’t many out there that work this way.

It’s a portable vape and it’s powered by a butane torch lighter, there are no batteries and nothing to charge with this one. This would be the perfect vape to take camping or on long trips where you won’t have access to electricity,

Vapor quality is awesome but it does require a bit of technique to get the absolute best results from it. How long you heat, how long you draw, how fast you draw, and the intensity of the lighter flame all affect the performance.

Since this vape is what I would consider “manual” heating it is possible to burn or combust your herbs if any part of the equation is off. If you have some patience I think most people can get into a groove within a few sessions and get great results.

This vape is the Lotus and this one’s interesting and unique because it is not powered by a rechargeable battery or anything like that. You use a torch lighter, a butane torch lighter, that’s how this thing is powered, that’s how the heat is generated. The flame never actually touches your material, this is a true vaporizer and the way it works is actually pretty interesting.

So before I get into the performance and how it works, let me just show you what it looks like and the different parts. This is what they call their vapor cap. Alright, this vape is only two parts, it’s very simple. This is like, the pipe or the stem piece, with the bowl or the herb chamber at the end. That’s where you’re gonna put your material. This is the end you’re gonna draw from. And then another part here, the cap, vapor cap, this top piece here is like a stainless steel. And the reason that it’s discolored like that is because I’ve had the lighter on it which I’ll show you in a second. When you first get it, it’s gonna look perfectly shiny. So, this cap is designed to sort of capture the heat from the flame and then turn that into just radiated heat, I guess, that as you’re drawing will flow down through your material and then down into the mouth piece.

The idea is full convection heating with this one. And the build quality is really nice, ya know? This is not an expensive vape, 150 bucks, but it’s really well made. I’m guessing because it’s so simple, they were able to make it so well. But it feels really solid, these pieces stick together here magnetically. Feels really smooth, it’s a really nice connection there.

Now this part, I’ll show you this close, okay that’s what the inside of here is gonna look like. There is a screen at the bottom which is removable to clean or replace. And then this piece, top piece, that’s what it’s gonna look like on the inside. It’s got the stir tool or pick attached to it which is really cool. So this is the top. So when you’re actually using it, ya know, the stir piece is off to the side, it doesn’t get in your way. But, ya know, in between draws for best performance, what you’re gonna wanna do is just take that and give your material a quick stir, snap it right back on top, really helps you get better vapor production, more even vaporization.

Now the lighter that you can get with it if you don’t already have one, it’s a very good lighter. You do have to fill it with butane. So, for example, this is the butane that I’m using. You’re gonna want to use a good one. So there is a slight little, I guess sort of method or trick with the lighter. You’ll see that right now I don’t have that much fuel left in there. So, the first thing you sort of have to do is like bleed it to let out any air in there, otherwise you’ll go to fill it and the butane will just stop going in even when it’s only half full, so whatever. So this is what I do, I take the back of a pick tool from another vape, push down, let the air come out. You’re basically just gonna do this until the air stops. That should be pretty good. So, now to fill it, hold it upside down, then take your can of butane, also upside down, fit the nozzle on. Let’s see if I can do it so you can see it. Alright, so this actually looks like there is still a little air in there. So it’s mostly full now. After you fill it, it’s best to wait a few minutes before lighting it just to let the butane settle.

So, to use it, you’re gonna wanna grind your material fairly fine. You can play around with how fine you grind it, but generally, the finer, the denser the vapor is gonna be and more intense, I guess, the experience. How fine you grind is also gonna affect how long you need to heat for. So this is sort of like a manual vape. Ya know, there’s gonna be a little technique involved. You’re gonna have to play around a little bit, experiment around a little bit before you’re probably gonna get the best results from it. So don’t over pack it, ya know, maybe pack half the chamber with your ground up herbs.

Then just take the top piece and it’ll slip right on. Now the one thing about the lighter that’s extremely important for the best results, very important, is the length of the flame that comes out. So this is adjustable, there’s a little, ya know, thing on the bottom that turns to adjust it. So, right now my flame is actually a little too small. Now the way you figure out or gauge how big your flame should be is, you’ll see with these lighters, there’s like an inner flame and then the outer flame like extends even farther. So the length of the inner flame, the brighter part, you want that to be as long as the distance between 2 tips of, ya know, like the whatever, the flower or the leaf here at the top.

So, those are the 2 tips I’m talking about, alright. So I believe it’s like 5/8 of an inch. Alright, so you’ll see that right now mine’s not quite long enough. So, I’m gonna turn the bottom a little bit. Oh, that’s too big. It’s kinda very sensitive so only turn it a tiny bit at a time. That still seems too big. Let’s see. That actually looks pretty good. That’s pretty good, so that’s roughly how big you want your flame. Now the reason the flame length actually matters so much is because you want a consistent experience with this and because it is manual heating, the intensity of the flame is going to affect how long it needs to be heated for, how quickly you can draw. So just to keep things consistent, pick a flame length and then stick with it.

Alright, so once your material’s in here, you’re ready to go, you’ve got your flame length set, what you’re gonna wanna do, is when you’re lighting the top here, you want the tip of the inner flame, the brighter part, to touch the middle and you wanna basically hold the lighter directly above. And then as you’re holding the flame against it, you could sort of move it a little bit around the middle. Alright, so let’s see if I can do it so you can see it. So I would do it like this, and like that. So usually the best method when you first wanna vape from it, if this thing’s cold, is to first do this and preheat for about 3-4 seconds before you start drawing. Alright, so this will sort of get this primed up and ready to start producing enough heat to actually vaporize your stuff so that you don’t have to sit there and draw for 20 seconds.

So do that, preheat it for a few seconds, then start taking your draw while you’re still heating and then let go of the lighter and stop heating before you start your draw. So keep pulling after you pull the lighter away for at least a few seconds, ya know, just to get any left over vapor or heat out of there. And that’s basically all there is to it. And then like I said before, in between every draw or two, I would take off the cap, stir it up, slip it back on.

So, I like this thing. Once you get the technique down, it is pretty easy to use. The vapor quality is really nice when you do it right, if you don’t overheat your material and you get just the right amount in there. Vapor quality is really top notch, the taste, the flavor, very pure. So I like it a lot. This vape actually reminds me of the Firefly in many ways. The vapor quality is very similar. How it works is very similar with the manual heating. The Firefly, you’re pushing in a button instead of using a lighter but the concept is basically the same.

Now one of the biggest drawbacks to this one is that it is kind of on the advanced end of vapes. It’s not exactly a beginner vape unless you’re cool with like, ya know, it taking a few tries for you to get good results from it. Because what happens is it is common or easy to underheat your material if you don’t take a long enough draw and then you won’t get any vapor and then you’ll be like what the hell? But it’s even more common and easier to overheat your material either holding the flame on too long or drawing too slow from it and when you overheat, that’s when you can burn or combust your herbs. So basically what I’m trying to say is if you’re not careful and you’re not using the right technique and if you don’t heat for the right length of time, you could burn your stuff and then you’re not really vaporizing anymore.

I also got the kit that came with the water pipe adapter. It is for 14mm pieces but this thing is pretty cool because you could take off the vapor cap, the top piece, you can put your stem aside, you could stick this thing right in the water piece you already have and then it works the same exact way- you would put your herbs right in here. This part is gonna slip right on top, and then there ya go. Go nuts, ya know, through your water piece.

So, two ways to use it. It’s pretty cool. I really like this one, I do. It’s probably most ideal for people who don’t like to vape a lot at once or who like to space out their draws. Do a nice slow session where you could take a draw, put it down, come back a few minutes later, an hour later, whatever because your material is not gonna be heated or wasted in between draws. I also think this would be great for people who are traveling or going on trips, or camping or whatever where you’re not gonna have electricity or you don’t want to worry about batteries.

If you like the concept but want something a little more advanced, a little sexier, I do recommend you check out the Firefly, very similar performance and just the way they work is similar, but like I said before this is the lighter on the Firefly, the button.

So thanks for watching, if you have any questions about it let me know, and stay up!