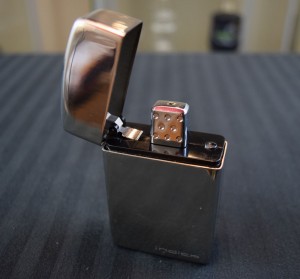 The Indica portable vaporizer is one of those types of vapes that’s modeled after a well-known device. I’m not a particularly big fan of companies that do this, but I tried not to let that affect my opinion while I tested it out.

It’s actually pretty well-made, it feels solid and doesn’t really seem like they cheaped out on any of the components. It’s also pretty small, only the Magic-Flight Launch Box is smaller as far as herbal vapes go that I’ve reviewed.

Performance-wise I feel that it’s just about average. I’ve definitely reviewed worse, but there are also a handful of other portables that I like and rate higher. I found the vapor that this thing produces to be a little on the light side and also a little hot/harsh.

This video is my review of the Indica portable vaporizer, the one that looks like a giant Zippo lighter.

I have mixed thoughts about this one, so let’s jump right in and go over all the details.

The first thing to talk about is its size and appearance. It’s designed to resemble a Zippo, but it’s probably double the size of a typical lighter. However, it’s one of the smallest herbal vapes I’ve reviewed so far, only a little bit bigger than the Magic-Flight Launch Box.

Build quality is pretty good; for the price range it’s in it certainly feels pretty solid, and it really doesn’t feel cheesy at all. The herb chamber and vapor path is made of high grade stainless steel like most vapes, and the outer shell is a polished metal that will probably start to show some scratches over time.

This would be considered a conduction vaporizer since your material gets heated by the walls of the oven and not strictly by hot air like convection vapes. In my opinion there are pros and cons to both styles.

Using this vape is pretty easy, but you need to pack the chamber a certain way for best results. To access the chamber of this vape just remove this cover piece here and then if you’re afraid of losing it you can stick it to the bottom of the unit since it’s magnetized.

You want to make sure you grind up your material really fine, basically as fine as you can get it. This increases the surface area of what’s being heated which helps produce thicker and more consistent vapor.

Equally as important as grind consistency is how tightly you pack your material. You really don’t want your stuff loose in there, you need to pack it fairly tight to get it to perform well. You don’t want it so tight that barely any air can pass through, but you also don’t want your stuff floating around in there, somewhere in the middle is good, Goldilocks style.

Now when you’re packing this vape you need to decide beforehand how many draws you want to take or how long you want your session to last. You basically have two options; you can pack the oven full or you can half-pack the oven using the stainless steel spacer they provide.

Once you have your chamber packed it’s time to turn it on, and you do that by holding down this button on the top for 3 seconds. Once it’s on you then have to select a heat setting, and this vape gives you five options ranging from 340°F to 412°F.

I personally found that the lowest and highest heat settings don’t really provide a great experience, so I would say your best bet is selecting one of the middle 3 temps. To change temperatures you push this button twice and it’ll cycle through the different colors that indicate the various temps. So for example if you wanted to vape on the middle heat setting, which is 376°F indicated by the green light, you would have to press this button six times, but slowly like this…

Once your desired temperature is set you then wait about 60 seconds for the light to blink, which indicates the oven has reached operating temp and it’s ready vape from.

Now this is the mouthpiece here, and for best results you’ll want to take a slow, long draw, and it may take a few pulls before you start to get decent vapor production. It’s a little strange holding something that looks like a lighter up to your mouth for 5-10 seconds, but that’s neither here nor there.

This vape does have an auto-shutoff feature, and I personally feel that it’s set for too short of a time period. After you set your temp the unit will automatically shut off after 10 minutes, which really isn’t long enough for a full session, and it doesn’t beep or otherwise indicate that it’s shutting off, so you have to keep an eye on it.

The reason this becomes slightly annoying during use is that it’s not as simple as hitting one button to turn it on again – if you were vaping at one of the mid-to-high temps you’ll have to hit the button at least 6 times to resume vaping, with pauses between each setting.

As far as performance goes I would consider this vape about average. Even though it works in a similar way to the Pax I don’t find the experience quite as enjoyable. The vapor it produces is decent, but it’s a little on the light side, and it’s also kind of warm. I’ve definitely reviewed vapes that are worse, but a bunch of them also perform better. Vapor taste is also somewhere in the middle, pretty average.

One feature that I would consider an advantage is the fact that it can used while it’s plugged in and charging, with many portable vapes you can’t do that. This unit does take a couple of hours to fully charge, which is longer than most others, but battery life is slightly above average at 60-90 minutes, depending on what heat setting you use. In my testing I used it on the purple setting most often, or 394°F, and my battery lasted 70 minutes before dying (seven 10 minute sessions).

It doesn’t seem like there is too much maintenance or cleaning required with this one, the most important thing to keep it running smoothly is to brush out the chamber after each use. After about a dozen sessions or so you might have to give it a more thorough cleaning, which would involve using a little rubbing alcohol and one of the provided pipe cleaners to clean out the chamber and vapor path. The mouthpiece at the top is removable and may also be an area where some buildup could occur.

Overall, I don’t think this is a bad vape at all, but because of the average performance and the fact that it’s modeled after a Zippo I kind of consider it a little gimmicky.

One thing I do want to give this company credit for is the owner’s manual, it’s well-written and easy to understand which is rare these days. However, I was a bit disappointed when I saw the warranty they offer, because it’s only for 6 months and that’s less than almost every other vape I’ve reviewed.

If you’re strictly looking for a good portable vape to carry around with you there are a few that I currently recommend the most: the Magic-Flight Launch Box if you want the smallest or quickest option, the Pax or the Ascent if you want one that works in a similar way but performs better, and the Firefly if you want the highest build quality or tastiest vapor.

To watch reviews of these and many other vapes check out my website at VapeCritic.com. There you’ll also find a link to the store I bought mine from if you think this model is right for you and you’re looking to buy one.

I really appreciate you taking the time to watch, and stay up!