What’s up! This is my review of the Milaana vaporizer by RastaBuddhaTao, and I also have their Zion and Splinter vapes here as well (see full video review above). The Milaana is an unregulated, on demand, portable convection vaporizer. The Zion is the regulated version that uses two batteries instead of one.

As you can see, these are made of wood, I got the Maple Zion and the Walnut Milaana with the emerald green glass stems. The way that both of these work, they both have glass stems for both the mouthpiece and the herb chamber (where you’re going to put your herb). (see video)

These are very simple vapes. It’s one button on the front, that’s it, one button. A battery compartment and one button. The Zion is easy to use but this Milaana here, the unregulated aspect of it means that there’s some technique involved, a little bit of manual heating going on. You’re going to have to develop a little bit of a feel for it, for when your stuff is vaping, when you have enough vapor to stop your draw, stuff like that. That’s what unregulated means, you’re going to be starting and stopping the heater, you’re going to be adjusting your draw length to find the exact right balance of vapor production and heat intensity. You know what I mean? 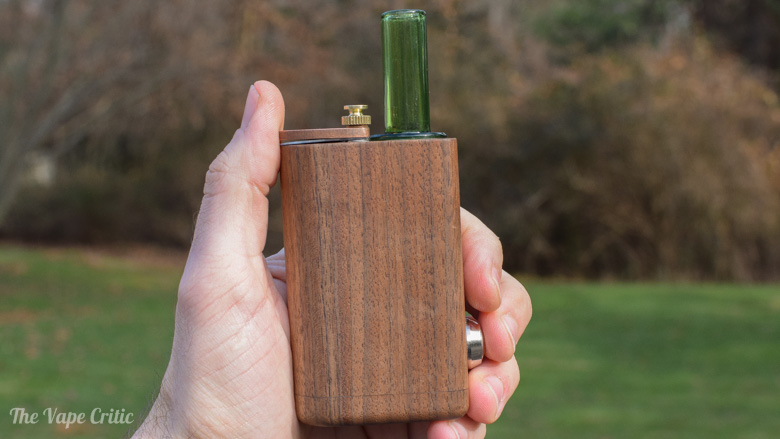 The regulated one takes out some of that guesswork and does that for you, so you know whatever temperature you set the dial on. This one has more than just the button, it has a temperature dial also (or heater intensity dial, see video). So if you set this to say three quarters or something like that, it’s going to be a more regulated, even heat coming out. Both of these use 18650 batteries as their power source – the Milaana holds one and the Zion holds two. The recommended batteries for best performance with these are the LG HG2.

I’m going to go ahead and start a little Milaana session here (see clip in video). Now on the Milaana you’ll notice that there’s two parts that go over the battery compartment. One of them is metal and the other one is plastic and looks like a guitar pick. So when you’re storing the Milaana, when you have a battery in it and it’s not in use, slip the guitar pick in-between the battery and the metal contacts. That’s how you stop the battery from draining while you’re not using it. Then when you want to use it, slide over the pick, slide the metal cap back on, and then tighten this little screw.

Now you’re good to go, it’s active, in standby, it’s ready to go. So the way these both work is they have little stainless steel screens that are shaped into a basket to stick in the end. There are a few different ways to actually use it.

There’s two different ways I like. The first way I’ll show you with the Milaana here, is just to put the little basket right at the tip of the glass. (see video) It’s basically a micro dose vape like this. 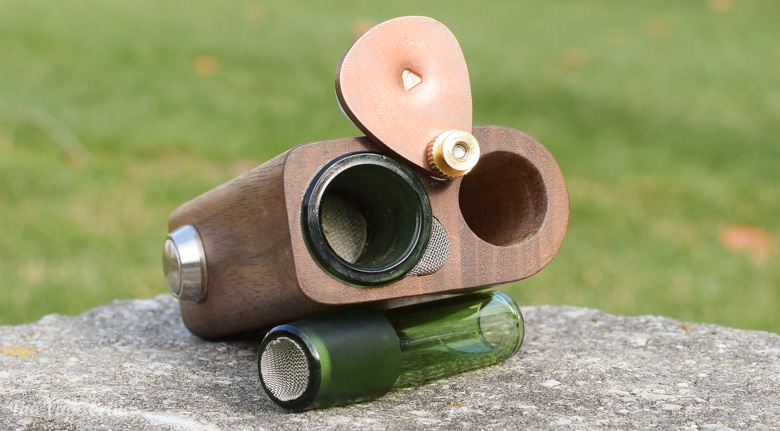 I usually just put some in like that, a very light pack. Now I only pack like this because I kind of just don’t like when the herb comes out at all. A few other people that I spoke to about this said they don’t tamp at all, they just like to suck some up into the screen and then just leave it really loose. You probably do get more even vaporization like that.

I don’t mind giving it a stir once because I like the benefit of there being a little more and it staying in the screen. Now an alternative to that, if you want it to stay in there but keep it loose (don’t want any falling out), you could do what I did with the Zion’s stem, where I push the basket screen a little farther in, and then I take one of these tops little basket screens. But it’s got a rim, so it actually goes at the tip and then the lip, or the ridge holds it at the tip so you’re going to use this one almost as the blocker. (see video) 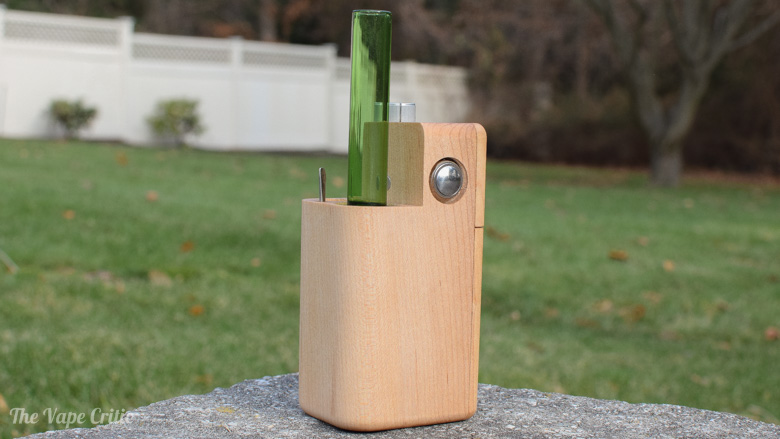 It’s going to keep the herb in between the two screens and prevent it from falling out. Even if you want to tap it to shake it up between draws, which is what I do, it’ll stay in there so it’s cool. I put about 0.1g, maybe a little more in the basket in there, and then I just put that on top, keep it loose. There’s not really any reason to have to pack it tight when you do it like this.

So that’s how I do that. So for this one, I just have it in the tip, very lightly packed. It’s got the ground glass connections so it sticks in pretty well, but then if you want to take it out, it comes right out. So you hold the power button, the heater gets going, it only takes a few seconds, then you start your draw. Since this is a mostly charged battery that I’m using, I’m not going to wait too long, but this is unregulated so i’m going to give it a little more time.

OK, it’s got a nice pure taste. Glass and stainless steel, there’s nothing else in the vapor path, it’s simple. So usually the way I use this one, is I’ll sometimes in between draws, turn the stem a little bit and then take another draw to try to keep it even. So that was a handful of nice draws from less than 0.1g. Can you ask for more than that? Now really all you have to do between loads is just scrape the screen out, sometimes you could just blow in there to get some of the stuff out. 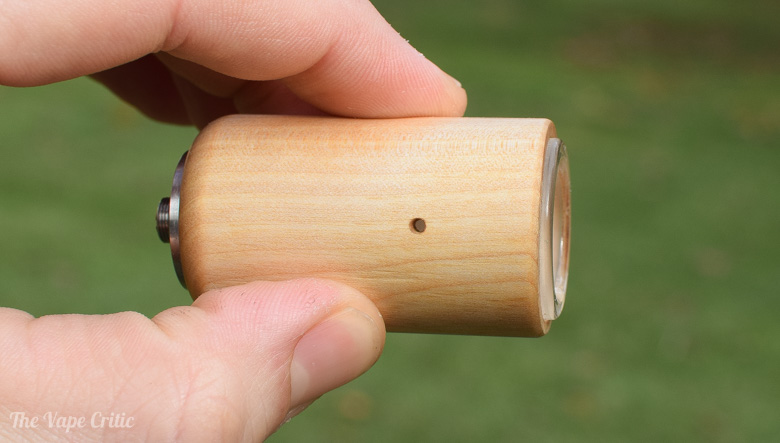 It’s easy to clean these stems, all you need to do is soak them in ISO alcohol and agitate them. I also sometimes hold them with tongs and run them under really hot water for a few seconds, and it gets mostly clean. You don’t even have to mess with the alcohol most of the time. But any other time you want to clean the screens or if the glass is really dirty, some use alcohol.

These are very efficient with less than 0.1g in the screens, I get real nice performance from both of them. The only thing is that you can’t really put much more than that in at one time. So you just reload a few times if you’re going to have a big session or if you’re with multiple people. Oh, I almost forgot, they have a new product. The Splinter. 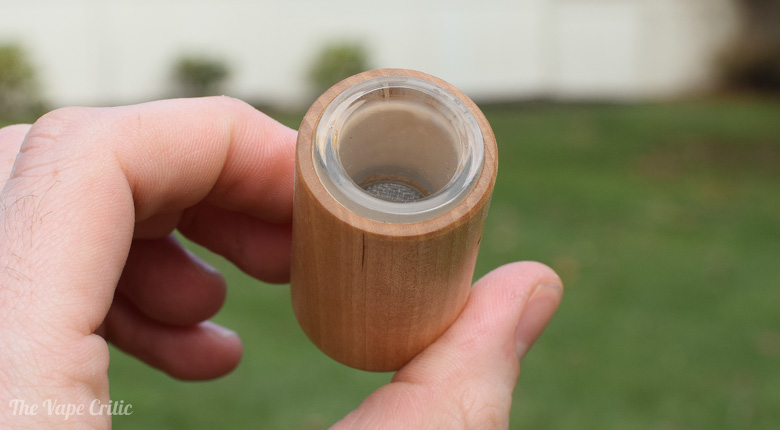 The Splinter is interesting, what I have here is just a box mod, a battery. Put a 18650 in it and it becomes the power source for a vape attachment, like the Splinter. (see video) So this is pretty much a mini Zion, a portable one. That’s what this top thing with the regulated heater is, so you can set your wattage on here 20 to 50 watts with a Splinter.

So I almost forgot to mention that these are made in the USA, everything about them. They’re very high quality but they’re simple, but they’re high quality and they perform well, and they’re easy to use. That’s why they’re cool, and that’s why I like them. RastaBuddhaTao, check them out.

If you have one and want to share some tips, or if you want to read more user reviews, check out the Vape Life forum. 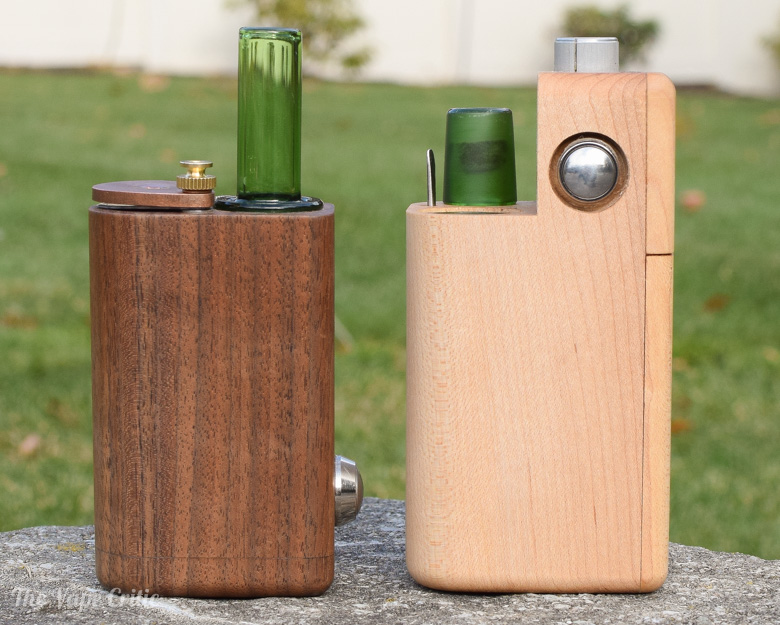